I will be counting down to my favorite holiday, aesthetic and candy wise on the blog this year which is why the dailies may not be daily anymore. Just pretend like you care. thx. I’m thinking every even number, so we get 12 christmassy (af) posts. Uni doesn’t allow more. I mean it does but I ain’t failing for this shit. If you want 24 you can head over to the other blog and read the 12 posts I wrote 3 years ago:

nvm the dailies are still coming. If they stop you know why.

I have been up for 12 hours exactly now. It’s 4:20pm (no blaze). I got out of bed at 6 and started illustrating for 2 hours straight. So yeah this happened.

Anyway all I wanted to say is that I’m trying that stuff tonight idk how we ended up talking about Matty Healy.

Also bought some other stuff that I did actually need like bananas and tissues. #adult

Then I had Uni and I actually understood stuff. I know! Like?!

Then I went shopping cause I’m irresponsible and stupid. That’s also a new way of dieting. I was gonna sign up for the gym, but instead I bought clothes. Now I don’t have money to buy food. So no need to exercise.

Very good day today. Let’s summarise: I will sleep tonight, I realized I’m only 85% stupid instead of the previously thought 97%, I won’t get fat and my clothes are da bomb.

It’s 5:08 now and it’s dark. I’m sitting at home procrastinating. Homework until next Friday is summarising an english text. At least it’s a language I actually understand. I’ve heard so much spanish and arabic the last few days. ugh. my life is so bad.

That’s it I will be making the same food as yesterday later and then I’ll watch something and then I’ll take my drugs (fbi, if you’re reading this I don’t mean actual drugs I mean the sleep stuff I mentioned in the sentence beginning with ”At 10…”, I’ll highlight it for you) and then I’ll sleep. If I wake up at 4 again I’m suing. 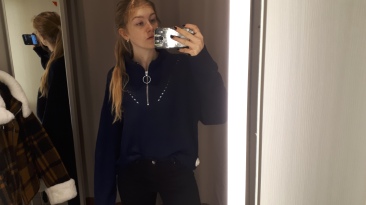